Sometimes I wish I was more like one of the guys I fish with. He routinely wakes up in the morning. Sometimes even earlier. If he says he'll pick me up at 6 o'clock, I can expect him to be rolling in my driveway at quarter-to, and the coffee from the drive-thru will have had time to cool off.

If I was like that, I wouldn't have to set three alarm clocks to get out of the house on time, but I also might not know that the best time to jig for walleyes, bar  none, is sundown.

Walleye fishing at night can be very active. The walleye's unique eye structure gathers light better than a squirrel on steroids gathering nuts, and this gives the walleye a huge advantage at low light times. It's like walleye are wearing night-vision goggles while they are feasting on those helpless little yellow perch. 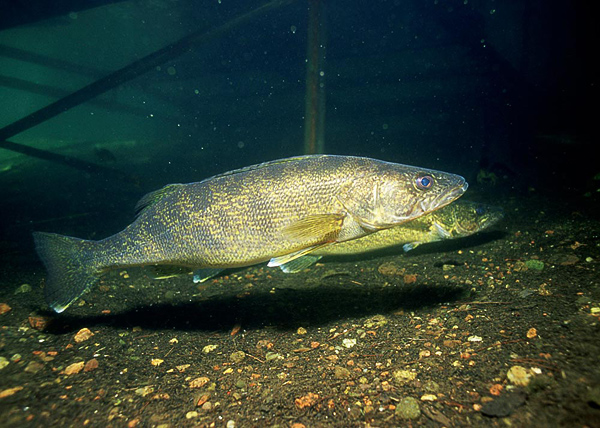 Overcast, choppy days obviously have a certain charm, but regardless of the weather, prime-time rolls around twice a day: sundown and sunup. You can get up at 6 a.m and enjoy a couple primo hours, or you can stay out after the sun sets and pull 6 or 7 hours on the night shift. For those who have to juggle work, Little League games, music lessons, and extensive honey-do lists, the night bite is the obvious choice. And have I mentioned that I like to sleep in?

When night walleye fishing, anything that takes your line out of the water will keep it out for much longer. Untangling a bird's nest in a reel, corralling a shiner, and re-tying a knot all become more difficult. So you must simplify everything, from your choice of equipment to where you fish.

Technique-wise, there is nothing much simpler then trolling, and that is what I do the most. Since the wind usually dies down at night, an electric motor will push most boats along with enough speed, and the quiet will help keep the resident cottages happy (more than one lake has had its boat launch gated because of noise complaints).

When it comes to fishing tackle, use whatever you can operate most effectively. I lean towards a 6-foot 6-inch medium action bait casting rod and matching reel. Since you'll just be dropping the bait over the side of the boat and the free-spooling until it is sufficiently far from the boat, the reel's foremost features should be reliability and ease of operation. Bait-casters that use simple push-button operation and a big, easy to adjust drag, they aren't prone to malfunction.  An open face spinning-reel has too many spots where it can tangle.

Last season, I started spooling up with Berkley's new 10-pound-test Transition Fluorocarbon. It's easy to keep track of above the water line yet nearly impossible to see beneath the surface. Night walleyes don't shy away from line, so you can go with heavier line if you feel the need.

You only need to troll one type of lure: slender, floating, minnow-imitating crankbaits. You may experiment with different colors and sizes, but make them big, with 5-inches as the minimum. Walleye at night have no problem wolfing down baits 7-inches long or more, and they have a marked preference for forage long and slim. Since the lures we are talking about here don't have big lips, they must be of some size to send any meaningful vibration through the darkened water.

The original Rapala is the most famous bait of this ilk, but the Storm Thunderstick is also a proven producer. I have also caught a lot of fish on a gold and black Poe's cruise minnow  before I loaned it to a friend. He says he lost it, but I suspect he keeps it for those times he fishes without me.

Color is secondary to lure profile at night. Floating baits run between the fish and the sky and are lighted almost entirely from above. Just make sure the lower sides have a color found on the local large forage fish of that lake. That could mean perch, ciscoes, suckers, even ling.

In terms of where to troll, start with your best daylight spots. If the lake has an abundance of weeds, you can probably move out on the lake farther and core some bigger fish, especially if there is an extensive flat nearby. Similarly, if you spend time live-bait fishing off the drop-offs in your lake, and there is an expansive shallow flat between shore and break, you have located the prime night-bite spot.

I am not sure why a featureless, flat bottom becomes so attractive at night, but it does. And if it is close to a productive daytime spot, like a tapering rocky point or a saddle between islands, so much the better.

Some believe the walleyes leave their daytime locations to cruise the flats after sundown in response to bait movements. That may be true, but I am just as inclined to think we catch them there because it is so simple for us to fish for them there. Maybe we could hammer the walleye using 1/16-oz leech-tipped jigs to stumps and windfalls, but actually doing all that in the pitch dark is not as efficient as trolling the flats.

When trolling over a nondescript bottom, you can move at a consistent speed and know that your bait will stay out of snags and remain up were you want it. You don't have to meticulously back-troll to trace the edge of a weed line. The flats are a simple place to fish, and anything that is simple is good for night fishing.

Having said that, it is still good to have some variation on the flat. In particular, a change in bottom composition can be welcome. My favorite is a pile of boulders in a mud flat, but even a change in the size of the rock on bottom can do the trick. And, if a point of land intersects the flat, give it attention, too.

Possibly the most productive lure development in recent years has been the introduction of suspending baits. These can be deadly on nights when nothing else is doing the job. Periodically sweep the rod forward as you troll, and let the lure just hang there before the boat starts it in motion again. There is nothing quite like the feeling of a slack line going taught as a big walleye turns and swims off with the bait. For longer pauses, drop the engine into neutral.

Start by running the boat close to the weed edge or drop-off and work your way towards shore as the night progresses. As usual, take a winding path to alter the speed of the lure as they drag along behind the boat, and pull them over the structure periodically. A rod with a tip section that clearly telegraphs the action of the lure is worth it's weight in gold. Pay close attention, and you will know if your hooks pick up any grass, weeds, or zebra mussels.

If you do get into fish at the same spot on consecutive pauses, it is time to jig. Again, the KISS principle still applies. I like 1/4-oz jigs tipped with worms (easy to locate in the bait box) or PowerBait (easier still). Just drop them over the side and lift and drop. You don't want to go swinging rods around any more than you have to.

Night walleyes don't need a lot of action to help them locate live bait, so you can just lower a baited hook over the side and put the rod down. Make sure it is in a holder, because walleyes strike hard at night.

We are all aware that professional walleye tournaments don't run at night, and the pros catch lots of fish 9 to 5. We also know those pros are exceptional anglers, focused, and extremely well equipped. They could catch fish without bait at mid-day in the eye of a hurricane, if given three days to pre-fish the lake.

However, I bet none of them would object to a rule change that let them fish for an hour after sunset, and it is a great equalizer for those of us who have to balance fishing with little league, music lesson, and... you remember.

Trolling at night is a great way to catch walleyes, ecspecially in pressured lakes. But heading out after sundown is not for every one. That's why so few people do it. It is a drag getting the boat back on the trailer, and the chances of sticking a finger with a hook go up. Yet, to some of us, those challenges are well worth the rewards of pulling up the biggest fish of the year out of a quiet lake that is normally filled with water skiers. But we must simplify and maximize the time we actually spend fishing to realize the benefits. Thankfully, a number of products makes night fishing easier.